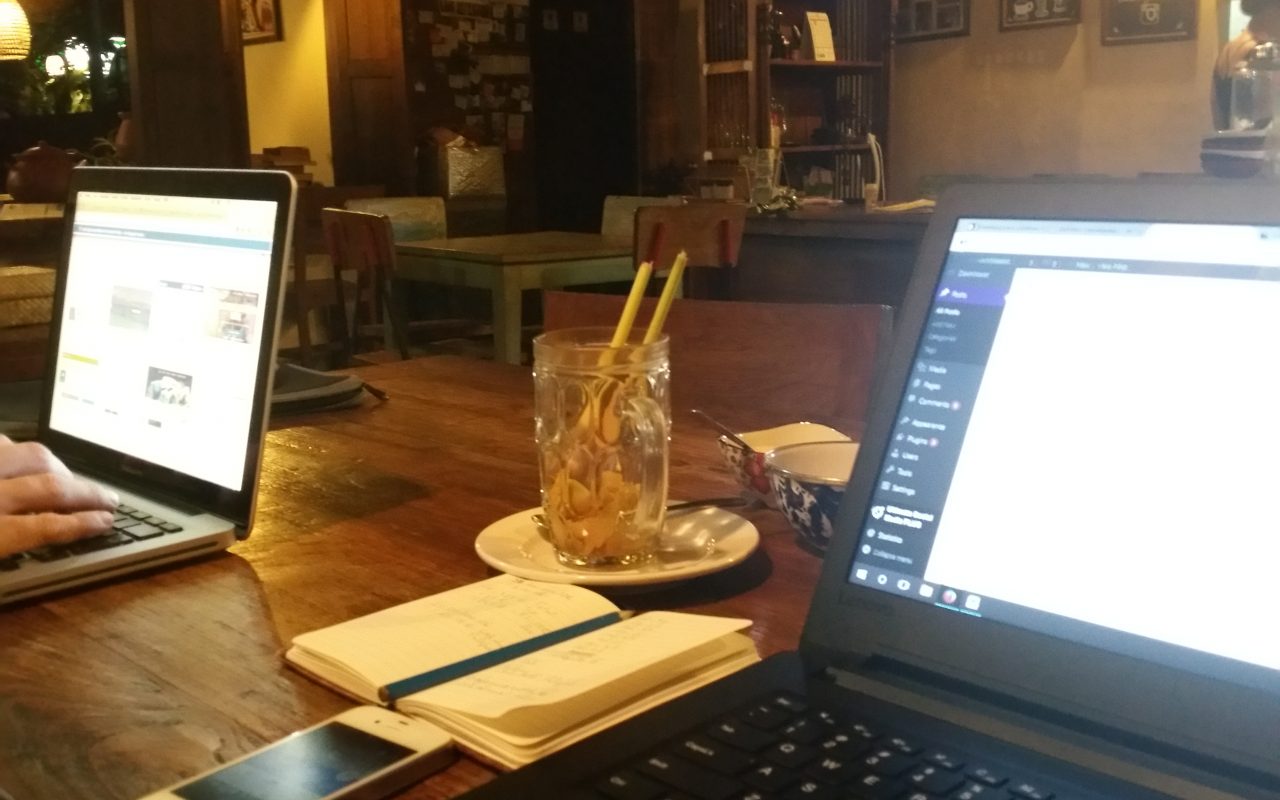 …about buying and repairing a laptop in Bali

Funny story, that didn’t begin funny at all: our laptop broke down, while we were in Kuta, Lombok and just decided to go to Flores on the land way, via Sumbawa. Really looking forward to that trip, we had to make a decision: either going to Bali and dealing with the laptop or going our way to Sumbawa. Work won, since there wasn’t anyway to go on without a computer. After realizing that the end of Ramadan means everything in Muslim hands is closed for a whole week, we decided to go to Bali, whicgmh is mostly Hindu. So, we booked the public ferry to Bali and tried our best in either repairing the Macbook or buying a new laptop…

Buying a laptop in Bali

At first we tried every lace we could find on Google, that would repair our MacBook Pro. We asked in every shop that looked like a repair shop, but everyone told us, that the only option is a big shop called ‘Global”. After asking in different Global shops, we realized that the whole service department was closed for th whole week, because of the Ramadan holidays and all the repair men are Muslim. That means we had to realize that we cannot fix our MacBook in Bali. So, we decided to buy a new laptop. Everyone we asked kept telling us to go to a place called ‘Rimo’ in Denpasar, to get a new computer. So, we took a Taxi and went there. What we found was a big building with many small shops – half of them closed – that sell laptops. After asking around a little, we went outside the building and found more shops along the street around the corner. Most of these shops are specialized in cell phones. We were in almost every shop here and in the end didn’t know what we want to buy anymore: a laptop, a tablet, a big smarthone or whatever. That’s why we decided to give us some time to think about it. The next morning, we were sure to need a laptop, went there again, found a small shop that we found trustworthy and decided to buy an ACER 13 inch laptop for 3.450.000 IDR, that was supposed to be topped up to 4 GB and included all the working programs, plus one year of international guarantee. We were told to come back one hour later to get the fully equipped laptop and waited in a cafe around the corner. After that hour nothing was ready and we waited another 2 hours for the laptop to get ready. We knew something like this could happen and took it easy. Then finally, the laptop was ready. We opened it, tried the installed programs and they didn’t work, plus the laptop only contained 2 GB. That’s were we got really pissed and started talking angry to the guys. All of them realizing that their deal wasn’t so good after all, apologized and explained that the top-up of another 2 GB would mean that we loose the guarantee, so they didn’t do it – without explaining. At this point we calmed down and explained that we really need a laptop a.s.a.p., that could work with the programs or want our money back. So, they started discussing to each other, while we did the same. In the end, we got another laptop, Lenovo that already contained 4 GB and 15 inch. But they still had to install all the programs. The technician explained then, that they have problems with the 2016 version of Windows and recommended to use 2010 – we agreed. Afterwards they offered to bring the laptop to our hotel the next morning. After looking them really deep in the eyes, we agreed – making clear that they had all the money already and we are not taking anything with us. But, we decided to trust them and exchanged phone numbers. The next morning, the technician arrived on his motorbike and brought the new laptop, which then worked fine. We had to pay 350.000 IDR more, because of the bigger and more powerful computer, which we already knew and paid. And after two days of hazzle, we finally had a computer that worked and started working.

Repairing a Macbook in Bali

Usually to repair a MacBook in Bali, you have to go to ‘Global’. They have the biggest service department for Apple and also sell most of the MacBooks in Bali. But during the holiday week after Ramadan, the service department is closed!

Nothing of that was of interest to us anymore, since we bought a new Lenovo laptop anyways, because we didn’t have the time to stay in Bali until the repair men come back from their holidays and stoll needed a laptop to work on…

Long story short, after our first working day with the new laptop, we took a walk to the beach in northern Seminyak and what happened??? We passed a small service repair shop, specialized in MacBooks… We didn’t really expect them to kow anything else, other then going to Global, but went in anyways. After repeating our little problem-describing-sentence they didn’t look puzzled at all, but asked for the year of the laptop. That’s when we realized that they knew the problem. Not believing what was just happening, we had a little chat with the two guys, who told us that they can – for sure – and for 750.000 IDR. (Since we had the problem before and know that the original peace – which we really (!) got – costs at least 40 – 50 Euros, we knew that this was a fair price). After leaving the shop, we needed some time to process this happening. It’s not necessary to tell, that we went there the next morning and they repaired the laptop, in no time and without any problems. And we had to carry two computers from now on… great!

We went to Sayasukamac in Jalan Batu Belig. They are not jet online and really competent!

On our way back from the beach walk we found another small Apple repair shop, in Jalan Petitenget! The guy also repaired the backside of our iPhone 4s in about 1 minute and took 125.000 IDR. He would have also been able to repair the MacBook Pro!!!

The end of the story: If you want to repair a MacBook in Bali and cannot go to a Global shop, go to northern Seminyak!