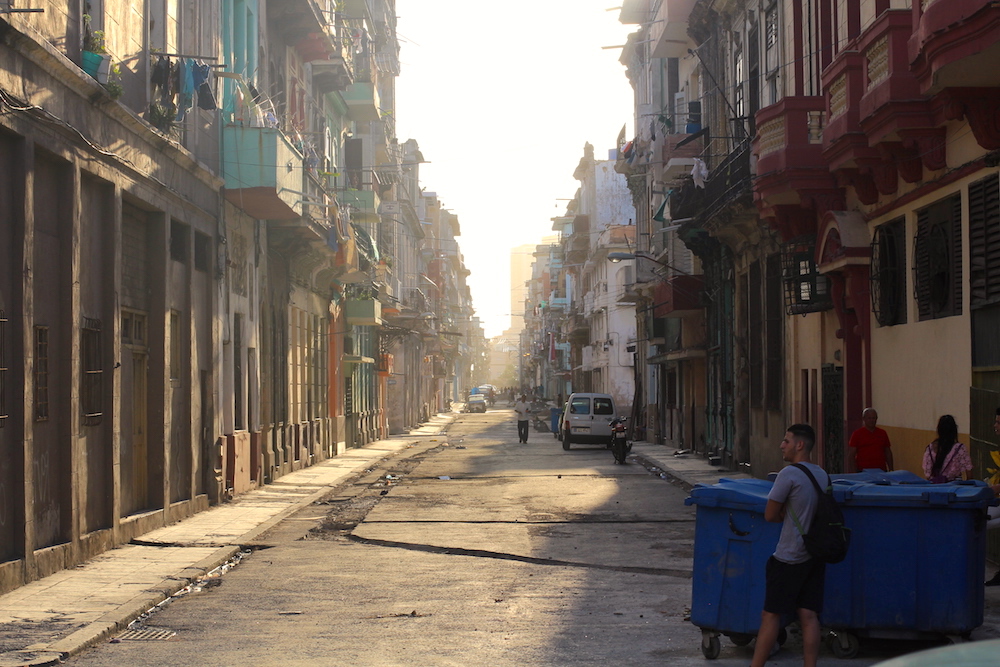 This country is difficult to describe, but arriving here is nice. The officers that check your passport actually look at you, say your name and welcome you into Cuba! We haven’t had such a wonderful welcome, for a long time. Getting into Cuba was easy – we had the travel card/ visa, that allows you to stay in the country for 30 days. We got it in Germany, filled it in ourselves and that was it! No one asked for a flight out of the country or anything else. Before we booked the flights we read a lot about entering Cuba, especially from the U.S., because it is new that you can enter Cuba from the USA without a special visa (we were not able to find good information about it). So, we were a little scared something might go wrong. But it was easy and uncomplicated.

Getting our luggage in Havana was an adventure, though. We stood in the middle of trolleys and people, carrying masses of electronics and others things in huge bags into Cuba. Very posh must be large flat screen TVs! We waited for ages (it took at least one and a half hours) to get our luggage – no one was complaining.

Like in other Caribbean countries waiting seems to be part of a culture. Some one should have picked us up at the airport. That didn´t happen. So we waited for another hour and decided to take a taxi. While waiting, a few taxi drivers asked us if we needed their services, but a simple “No, gracias” was enough to walk on.

At the airport and then also driving to Havana, we saw the old American cars that you see in the movies and pictures. They really still drive around here! Not every car is old though. The general picture is a mixture of really old cars, some new cars and a lot of in-betweeners (old Ladas are very popular).

We found a not too old taxi (which had to stop a the side of the street at one point because it had some water trouble) that drove us for 25 CUC into Havana Centro and to our Casa Particulare. On our way there we saw people standing at the streets waiting for someone to pick them up – hitchhiking seems to be pretty common.

Looking outside the windows we saw a country that seems to be a mixture of different influences: from Spain, the Caribbean, the Sowjet Union and the U.S. We´ll see how this impression will change once we saw a little more of Cuba.

We´re not entirely sure there really was a reservation for us, but we got a nice room in a Casa that is called “Villa Las Terrazas”. Arriving safe and sound, we had to rest a little bit, because we got up really early! When we were finally rested we were ready and looking forward to exploring Havana! 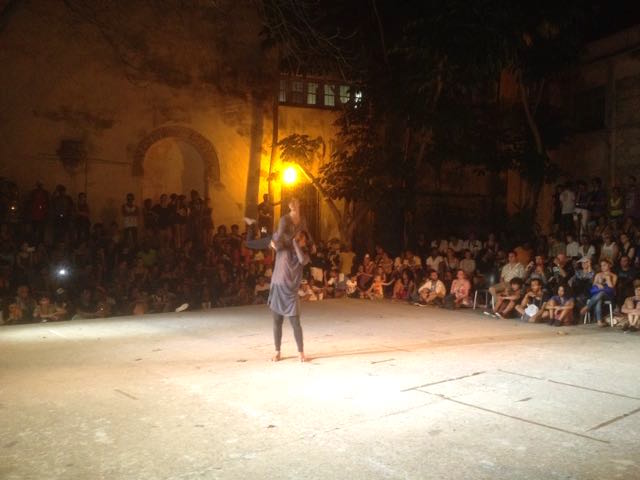 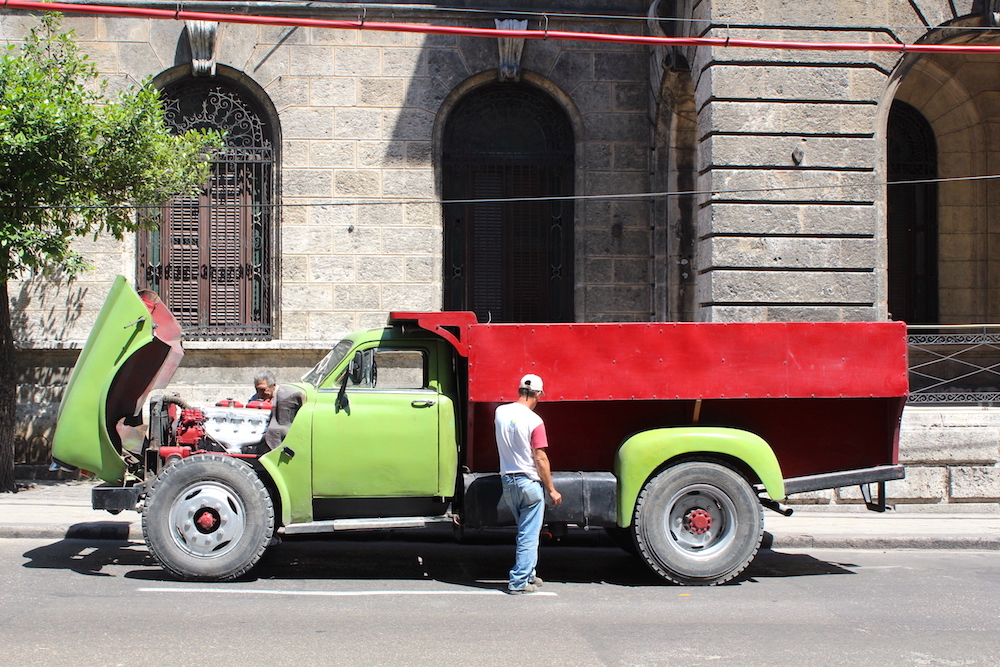 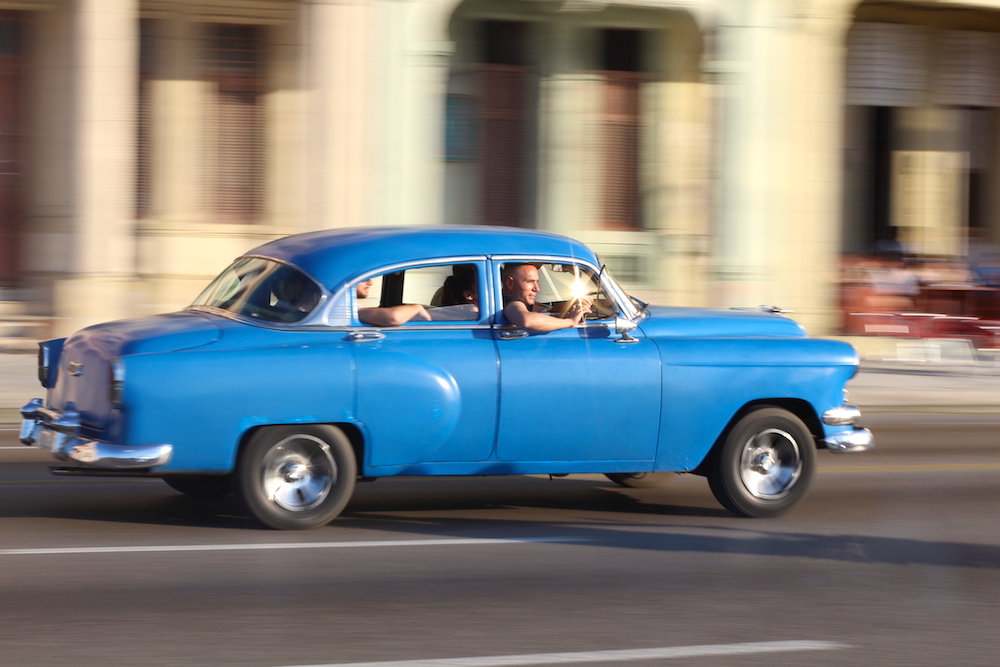 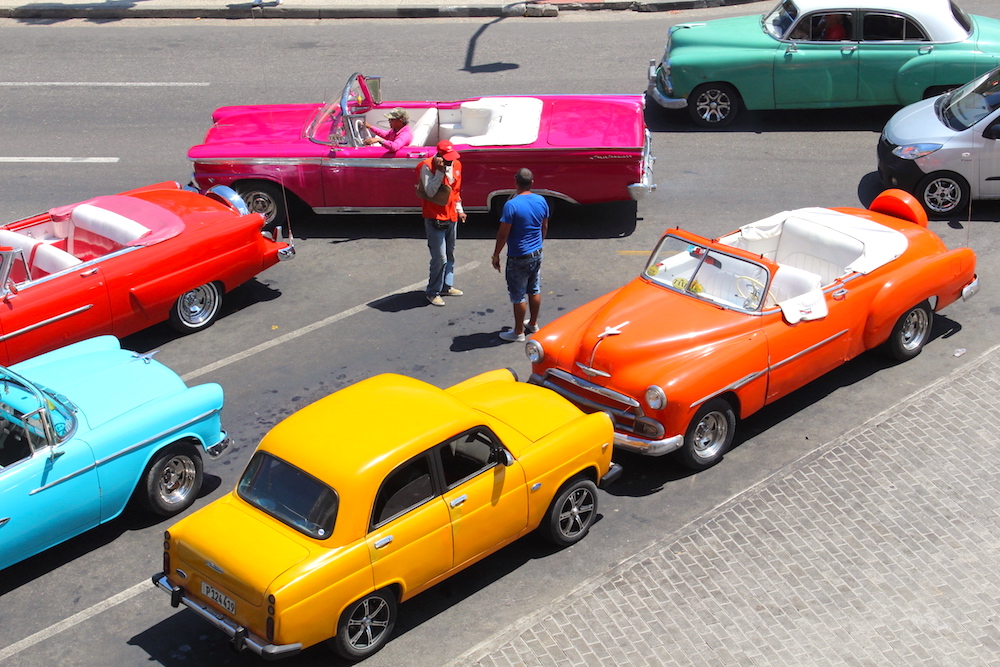 There are three parts of the central city: Centro Habana, Habana Vielja and Vedado. The first three nights we spent in a casa particular in Centro Havana and the other three nights in Habana Vieja. Boths Casas cost us 30 CUC/ night. We decided to not get a cheaper Casa, because they are a little further away from the center and if you aren´t walking the distance every day you will pay the difference for the Taxi…

How did we like Habana? It is a fascinating place! For us, it was as if the city is caught between being part of an old world, not existing in the whole rest of the world any more. And on the other hand there are so many things happening in Cuba right now, that it looks like modernity is catching up. We saw a building ground on every other corner, for example. The best example is the combination of really old American cars next to modern cars. You can also find farmers that still use their horse carriage. And the architecture of the city is simply amazing! It´s like walking trough a living, open-air museum. The houses are treasures – with most of them totally run down and others newly renovated.

In Habana Vieja are most of the attractions and the old part of town is beautifully restaurated. It´s also the place, where you will meet most of the tourists and most of the not so friendly Cubans, that are after your money.

Centro Habana is the part of town where people live their daily live. There are less sightseeing attractions – e.g. Capitolio or Prado, but a lot of food options.

Vedado is a living area – there are mainly houses and if you go there, you should know where the place is, that you want to go to. Alongside the sea you´ll find Malecon – the 8 km long living room of Habana, a promenade.

We took three days to see the main attractions in Habana, another day to see the Castillo and two days to enjoy the night live and relax during the day. We could have easily stayed longer in Habana – there is always something to see in this city. Sometimes we just walked for hours and looked into every door on our way, just watching the daily live in Cuba. The main thing Cubans do is repairing things. The constantly repair cars, they recycle everything and we even say someone who build new umbrellas out of old ones. Resources are rare in Cuba and therefore people use everything they can. We trunk out of glasses that where beer bottles once, saw places that sell every kind of screws, that you can think of and there is always someone that collects empty glass bottles and empty coke-cans. Of cause not Coca Cola but “Refresco National Kola”, which tastes surprisingly similar and quite good! 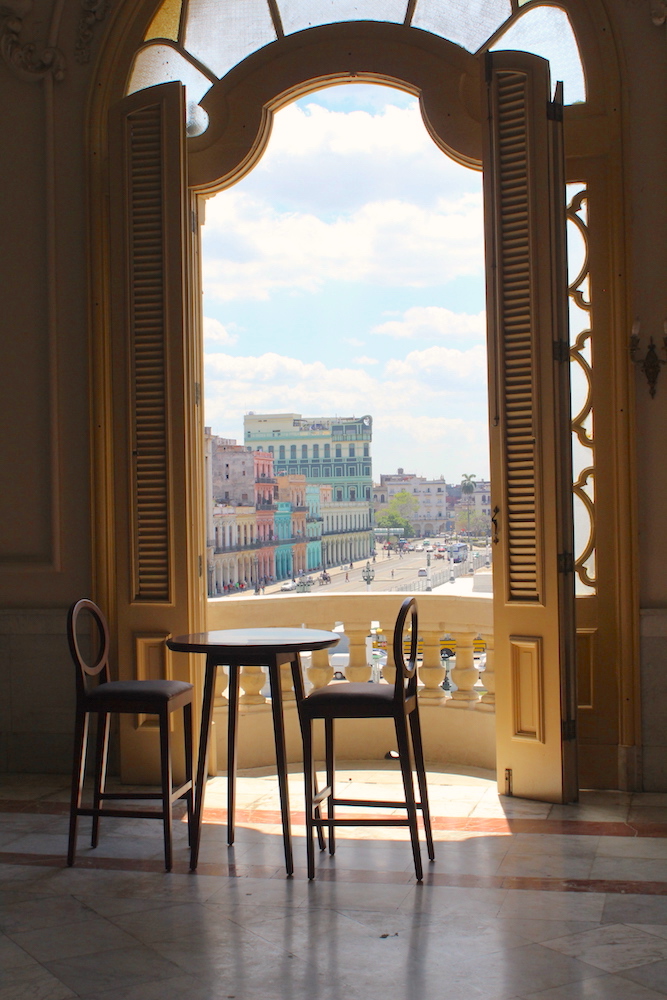 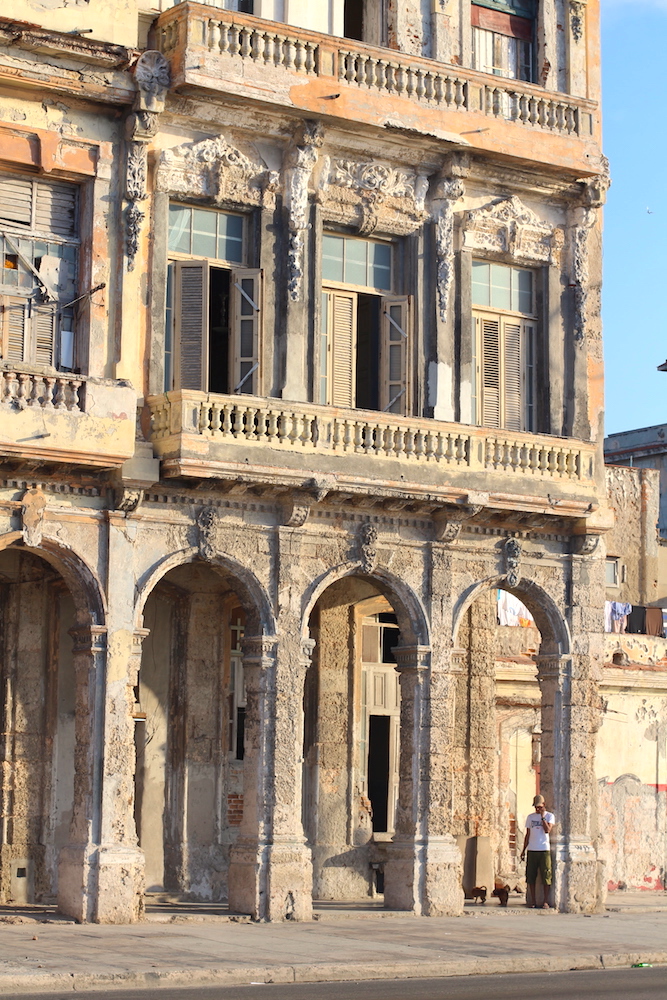 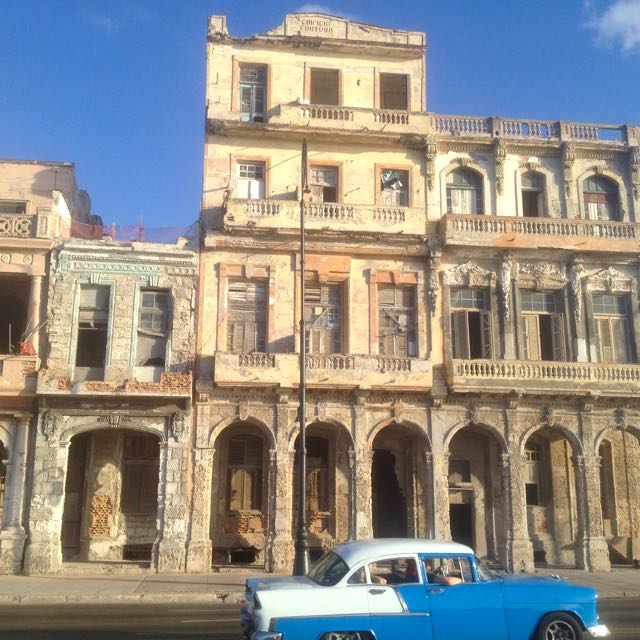 This is a really cool place for all kinds of art and for going out at night. The place is open Thursday to Sunday. It´s in Vedado and if you stay in Centro Habana or Habana Vieja you would have to walk at least one hour. We paid 5 CUC to get there and 6 CUC to get home – and it was a hassle! In the end we think 3 or 4 CUC could be possible but 10 CUC, what every taxi driver asks for is way too much. If you want to get home, just walk around the corner to the big street and wait for another taxi, or a maxi taxi to get you – many young locals do that.

The entrance fee is 2 CUC and there is a long line to get in. But actually it doesn´t take long. Our line was endless and we got in in around 15-20 minutes. There are a lot of guys who want to bring you in faster, if you pay 5 CUC.

Inside you get a paper-card at the entrance – you will not need money inside, you pay when you go. So, if you loose the card you will have to pay 30 CUC. Better not loose it! The inside of the factory simply fascinated us. The place got different level, floors and things going on. There is an fine arts gallery, there was a music performance, there was a film performance, there were dance performances, a lot of sculptures, art performances to take part in and to watch, different bars, cafes, a live concert and two DJs, etc. It was huge and it was amazing! The Cuban art is really interesting, it looks like they really have something to say and show to the world. And its all very modern art and full of young people (cubans and foreigners), who spend their evening with a cocktail and friends watching crazy performances, looking at weird paintings or discuss one of the absurd sculpture. We have never seen that many young people entering a modern art museum?!

Walking home from our visit at the Fabrica dell Arte we met a group of musicians in the streets. One guy carrying a saxophone, Ingo carrying a saxophone, the rest just happened, as it always does between musicians. They told us that there was a modern dance festival going on in town the next evening. We went there and we where amazed once again. In a backyard in the middle of old town we found a crowd and a dance floor with different performances. It was simply great! The dancers did crazy things and people just sat there and watched – for hours! And the average age was 20!

Don’t be afraid of dark places. We learned that Cubans like exactly the opposite thing of Europeans: cold and dark, or neon blue light. Being cold is a luxury around Cuba. Therefore only tourist places look open, warm and have a lot of warm yellow light. Cubans places look closed to keep the bad sun out.

O´reilly 304 and El Enfrente are two restaurants opposite of each other in the O´reilly street 304in Havana. Both are fancy places, with high prices and small portions ;-). We got that place recommended from a friend for the fresh Mango Daiquiri. You can also have dinner there, which is not cheap and/ or have a Cocktail on the roof terrace of El Enfrente. It´s always OK to only have drinks there. We enjoyed a delicious Mango Daiquiri (without sugar for Anna and still better then Ingos J)! The cocktail was 5 CUC each (but huge), which is really pricy for Havana standards, but it was the best cocktail we had in all of Havana and we didn´t regret spending the money!

The restaurant Le chuchallero at the Plaza del Christo in Havana is a small dinner place with a nice variety of food between 3-8 CUC. On top of the three floors house there is a cocktail bar, that sells strong cocktails around 2-2,50 CUC. But keep in mind: they don´t do reservations and therefore you always have to stand in a line to get in. Better go there early!

The café and bar El Dandy also at the Plaza del Christo is a nice place for breakfast. You can have a good coffee there and eggs with ham and cheese or a cheese omlette, for example. The prices are between 2,50 – 5 CUC.

If you walk around Havana Vieja you probably will hear the word “Taxi” like a 1000 times. Therefore it´s hard to stay relaxed and take it easy sometimes. We have the feeling that Taxi drivers are the best-paid people in Cuba at the moment. They ask for 10-15 CUC for a 2 km ride and most of the tourists pay it. Usually you can bargain with them to pay half of it.

To the Airport from the old town, we asked a driver on the street to pick us up and bring us there and payed 20 CUC, which is still very much.