A few days in Jakarta

A Durian is a smelling fruit, which either you like or you hate and you will only get to its sweet taste, if you go through the smelly part. Whatever way, we enjoyed our stay in this big and crazy city, that has much to offer, but a traffic problem…

We were lucky to meet a very nice guy on the dive boat in Komodo, who is an international teacher and living in Jakarta, who invited us to stay with him and his five animals. So, we lived in this amazing expad house in the middle of Kemang, which is south of old town, and enjoyed some luxury 😉 The two dogs were easy going, loved to be cuddled and the three cats were not really interested in us, but our bags.

To get to our friends, we took a Grab Car, that cost us 140.000 IDR and it took one hour. Blue bird Taxis are everywhere, but a little bit more expensive than Uber or Grab. Especially Grab is really big in Jakarta, and particularly Gojek is the cheapest and fastest way to get from one point to another – you have to get the App and be brave enough to sit on the motorbike with a stranger. We usually went with Grab Car or Uber, as it is the two of us…

In general it is absolutely amazing how the traditional and the modern world meet in Jakarta. Just coming from one of the most remote places in Indonesia and just falling into this big city, made us realize how both worlds exist in parallel. You can find the street food places everywhere, but also go to very good and modern restaurants, for example. You will find everything in every price range. 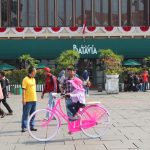 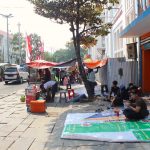 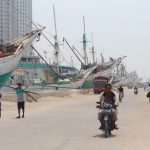 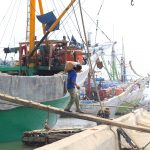 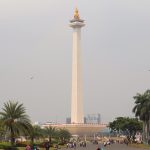 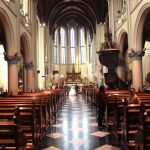 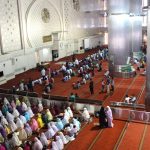 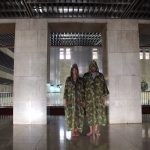 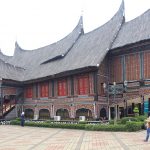 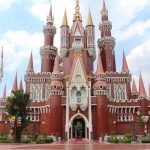 What did we do in Jakarta?

First things first: you have to plan ahead in Jakarta, because the traffic jam is everywhere all the time! That means you need a lot of time to get to places, which if you need to be somewhere in time, has to be calculated!

Apparently it´s a big thing to go to “the mall” in Jakarta – that means, it is a big thing for the richer people living in Jakarta… Our friend took us to his favorite mall and we were simply overwhelmed of this big, different, artificial and consume oriented world that we fell into. We had dinner in a lovely Indian restaurant in the mall and had a look around. After that we went to an Irish pub and listened to an Indonesian live band, that played pop songs, which everyone but us knew. They had good beer and it was fun!

The next thing to see is the old town area. You will find the historic center which was called “Batavia” as this was a Dutch colony, for a long time. We walked around the main place in old town, took a thousand pictures with everyone who asked us, had a coffee in Café Batavia – which is a really old and beautiful house but surely a pricy restaurant and walked to the harbor. You can pay a small entrance fee and walk around there, see the still-used old transport ships and realize again how thin the line between modern and old world can be. Afterwards we went to the national monument, but decided to not wait one hour in the burning heat, to get inside. Instead we walked around in the huge park and went to see the national church and the national mosque – which are situated directly opposed of each other. After this full day of sightseeing, we went for an afternoon sleep and had a quiet evening “at home”.

The next day, we went to the miniature park, which shows traditional houses of all parts in Indonesia and has a national museum, which explains a little bit the Indonesian culture – and its differences, coming from the different islands. We went there by Grab again and well, it´s not worth a trip. Most of the houses are in a bad shape and there is not a lot of explanation, plus everything is made like “Disney Land” – which give the whole place a really strange vibe. The whole area is made for driving around by car or motorbike and everbody tells you it´s too large to walk: It isn´t, maybe too hot, but not to large. The museum was nice, but coming all the way was not necessary. So, we decided to do treat us to a traditional massage in Kemang, for the rest of the day – at that was awesome! Our friend had a great recommendation around the corner of his house and we enjoyed every minute of relaxing time in the Spa J. In the evening our friend took us out to dinner – as a treat for this being our last day in Indonesia and him having his last day of holidays – in a very good Korean restaurant and we met a friend of his afterwards for a couple of beers in a “Biergarten”.

Since our flight was pushed back a half day, we spend our very last day in Jakarta shopping. Therefore we went to the one traditional market place south of old town, which is called “Pasar Baru”. We shopped for a few hours – Indonesia is known for its “Batik” – went back to pack our stuff and left Indonesia after two month with one eye crying and the other one laughing. Crying because we love the country so much and laughing because we were looking forward to the next step on our trip.

In general we have been lucky to be invited by someone who lives in Jakarta and showed us how the city can be for people who live there – which is a nice side of Jakarta. We heard that tourists tend to only see the traffic and realize that there isn´t much to do in term of tourist attractions. We felt like there are many more things to see in this city and being there for only three days was not enough time to really get the city.