This is one of the neighbor islands east of Flores, between Flores and Lembata is Solor, which we skipped. Lembata is a dry island in comparison with Flores, the greenest of the eastern islands. There are not many tourists here, so people will look at you and greet you, sometimes giggle and simply enjoy it, when you eat in their Warung… We only met friendly and nice people and did a motorbike trip from Lewoleba to Lemalera, one of the last remaining villages that still does indigenous sperm whale hunting.

How did we get here?

We arrived in Lewoleba by fast ferry from Larantuka in Flores. To get to Larantuka, we took the public bus from Maumere. It left at 7.30h from our guesthouse LenA house at a beach east of Maumere. We paid 60.000 IDR per person to get to the bus terminal outside of Larantuka. Their a local bemo driver came into the bus and told everyone, that if we paid 5.000 IDR each (the whole bus), we were allowed to drive into the city center with the bus, otherwise we all would have to get out and into the local bemos. Everyone agreed, paid and we drove on to the center of town, near the harbor.

At the harbor in Larantuka you can simply ask people to point you in direction of the boat (dont say ferry, because the ferry terminal is outside of town and not the place you want to go!)´that leaves to Lewoleba. You´ll find many eateries and shops and people there. And being the only two white people and also blond-ish, we were the big attraction there – as usual… There is a ferry terminal, where you can buy tickets for 100.000 IDR each (locals pay the same price, we checked ;-)). We could bring our luggage directly to the boat, were it was stored inside. The women “explained” to us – in not so many words – that we should be at the ferry at 12.00 a.m. and the boat will leave between 12.30 a.m. and 1 a.m. After having lunch is one of the Warungs at the main road, we waited until 1.15 a.m., because still needed petrol. Boarding was very chaotic and you need to fight for your space on the ship. After all of the 70 persons “entered” the boat and, how ever, found a place to stand or sit, we left. A chauffeur collected all out tickets – so don´t loose it – and our ride began. It was an ok drive, very much comparable with the drive between Bali and the Gili Islands. 1,5 hours of enjoying loud Indonesian pop music and the bumpy sea, we arrived at the harbor of Lewoleba. Everyone gets out, waits for the luggage to arrive and either walks to town or takes one of the many ojeks – that are, of course, already waiting.

That means, many “Hello misters”-later, we started our 15 minute walk to our guesthouse: Hotel Rejeki.

There were two accommodations that are close by each other and which we had a look at:

Hotel Rejeki: a run-down, but clean hotel managed by a friendly and very helpful manager Richard. Room with breakfast and aircondition is 225.000 IDR/night. The cheaper version is 180.000 IDR in the Fan room.

Hotel Olymp: That´s a new hotel in town, so rooms are clean and nice. There is a cheap version for 275.000 IDR per night and a more expensive version for 375.000 IDR per night, including breakfast. They have many rooms and booking in advance is not necessary. But the don´t speak english and so they can´t help a lot with organizing trips or ongoing journeys.

We decided to stay with hotel Rejeki, because Richard was friendly and helped us a lot in our search for information on how to get to Alor… (see post on Alor)

The town is cute and organized alongside the main road. We had the impression that every shop here is either a shoe shop or a “Baumark” – as we would say in German. Everyone – really everyone – smiled at us, greeting us, as if we were the best friends with the whole town! We walked around a little bit, bought a few things for our trip the next day, went to a Mie Ayam Warung to have dinner and to the barber to cut Ingo´s beard. Again, where ever we went we were the biggest attraction in years – at least that´s how it felt and smiling back at people and greeting back clearly made the day for not only a few of them. 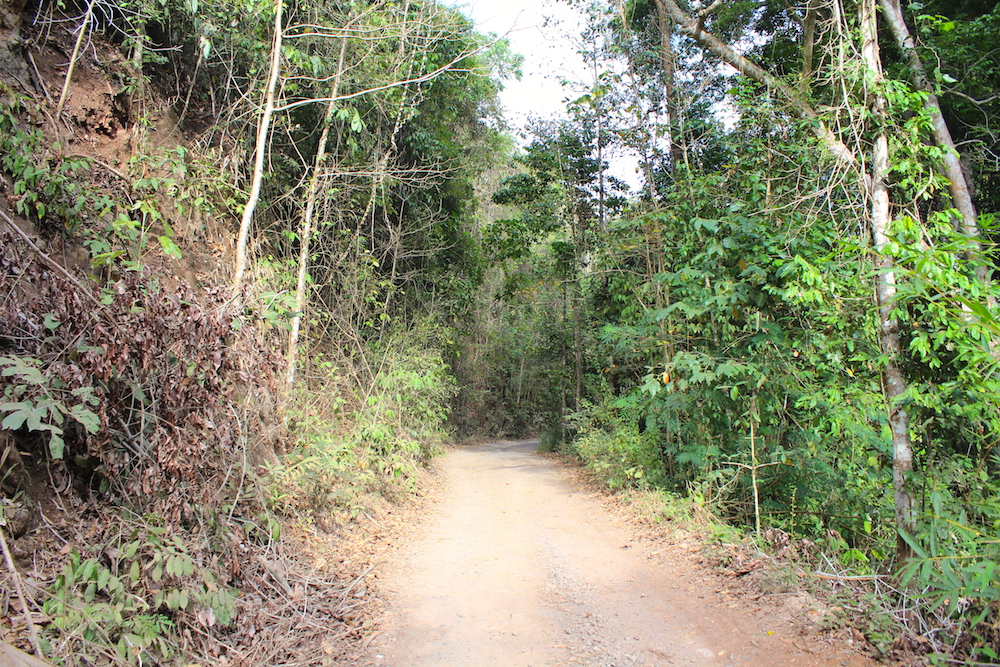 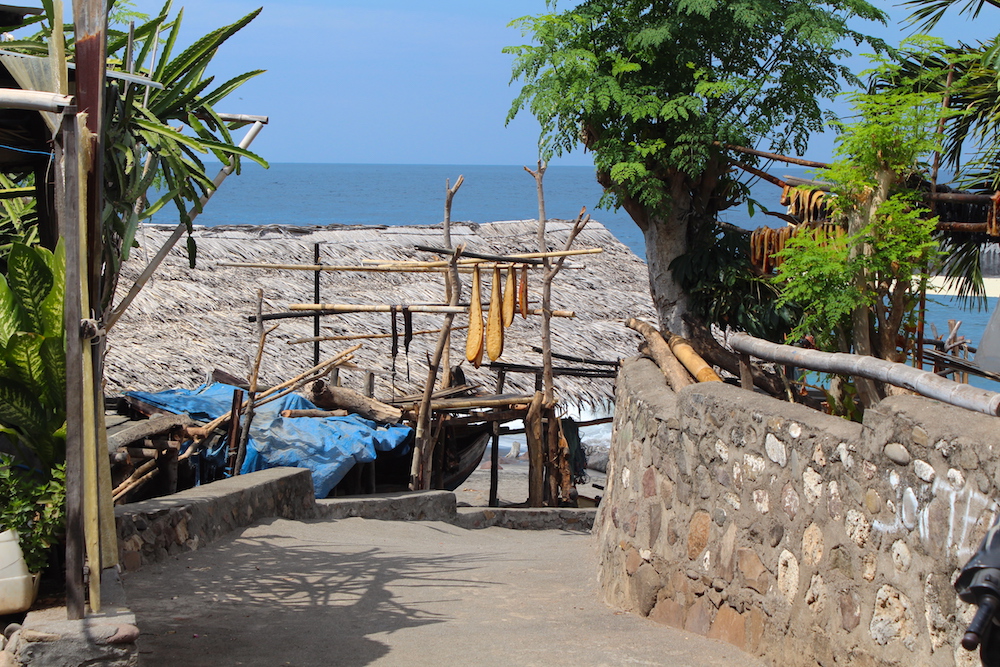 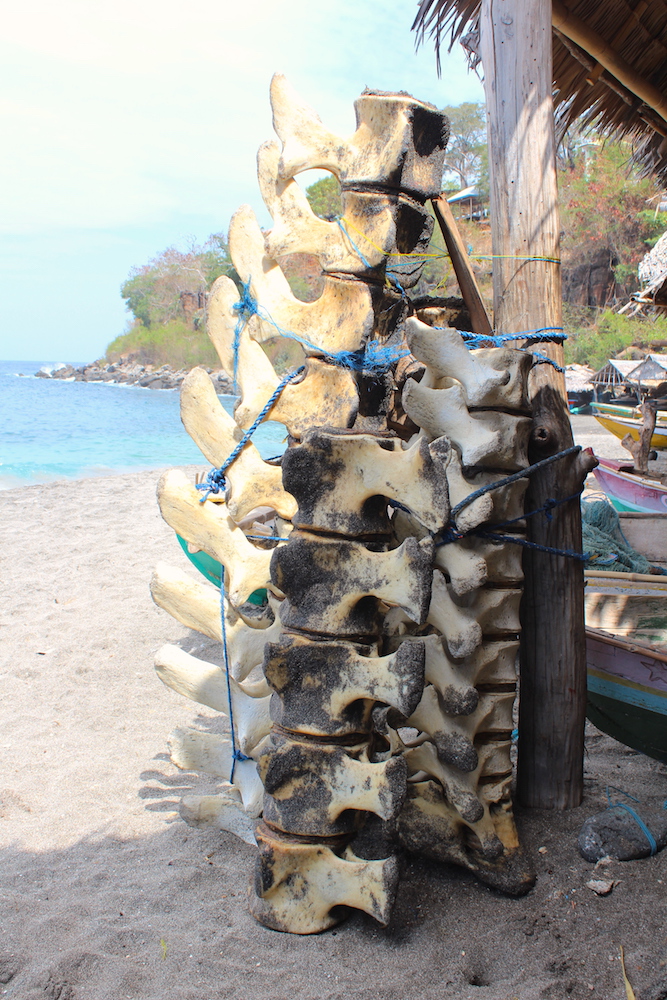 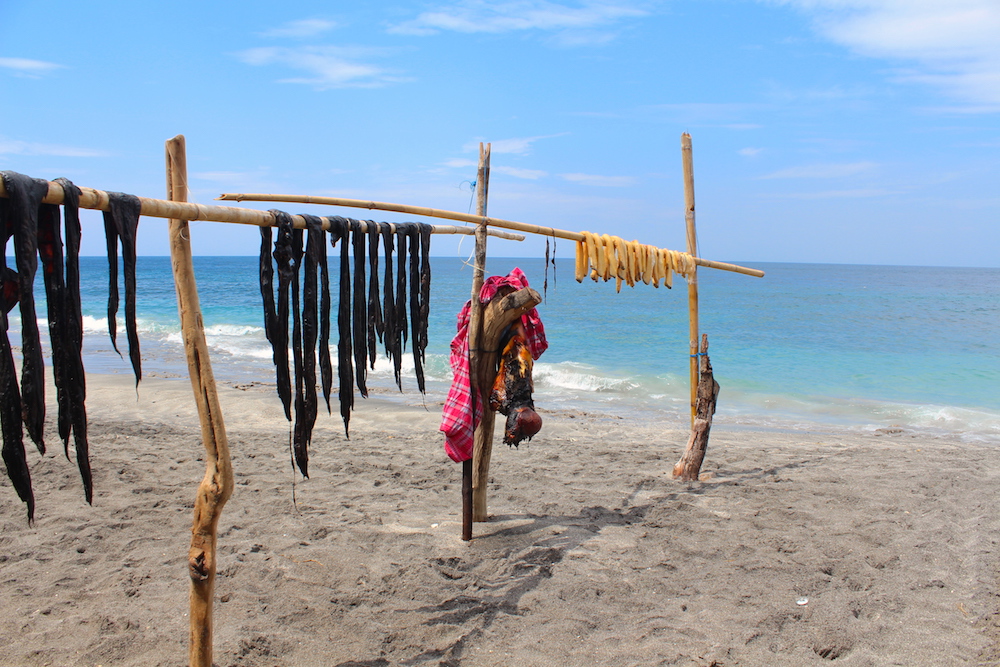 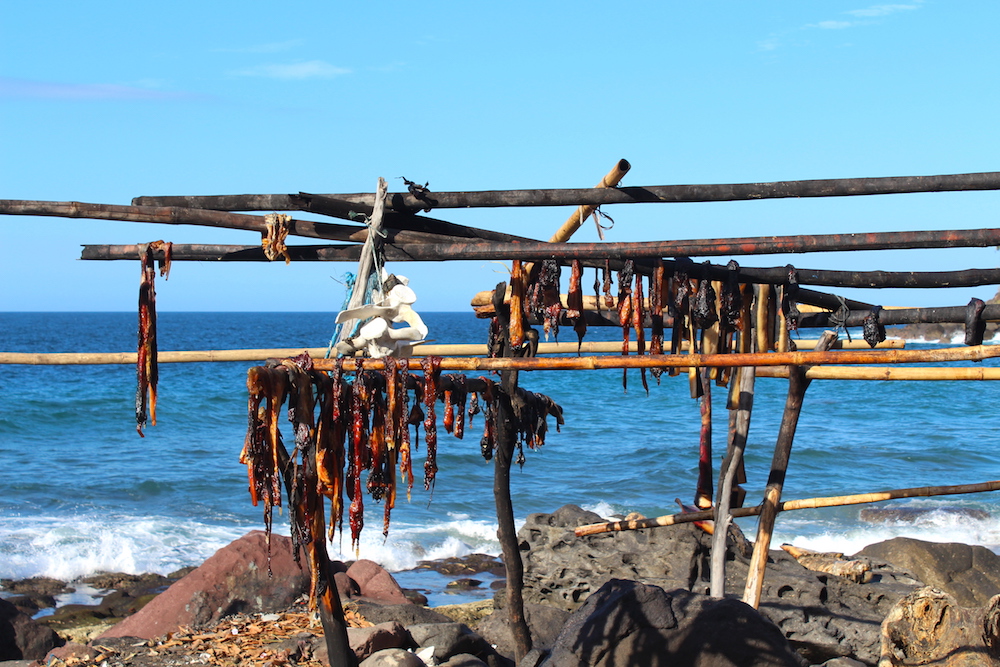 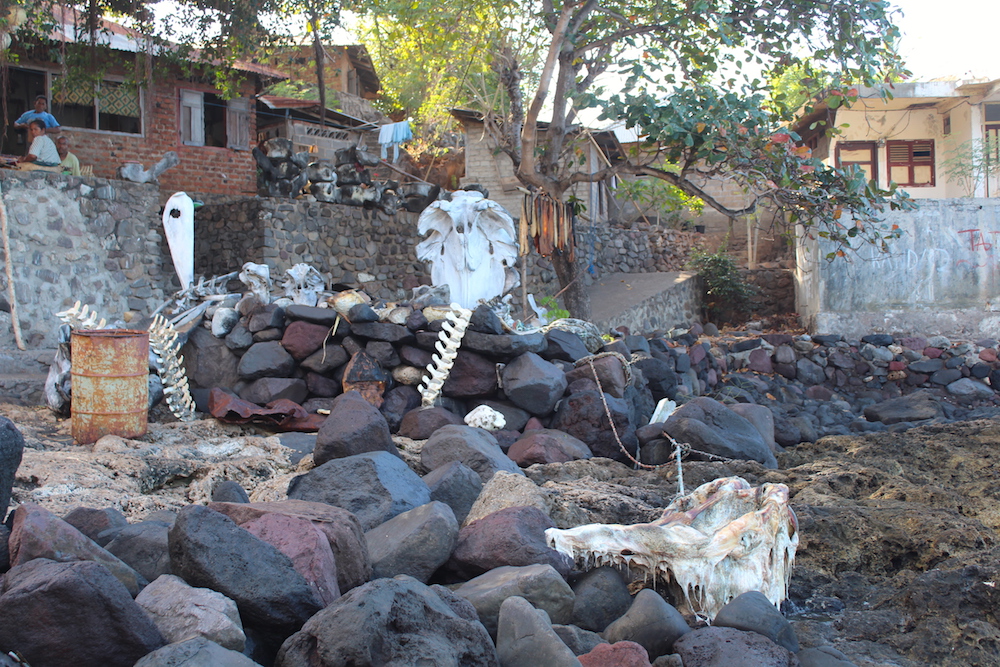 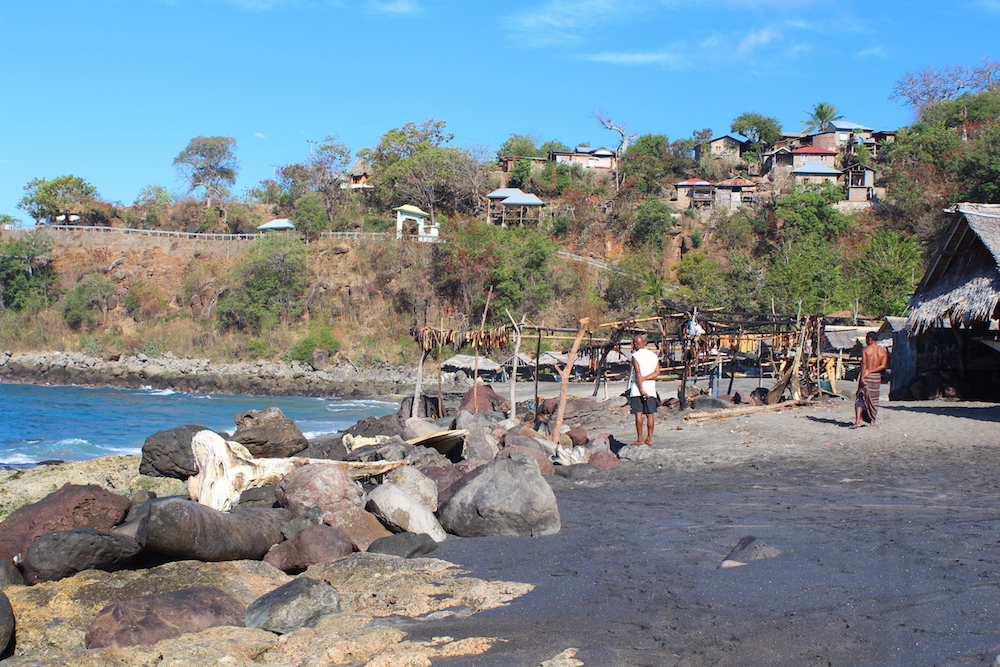 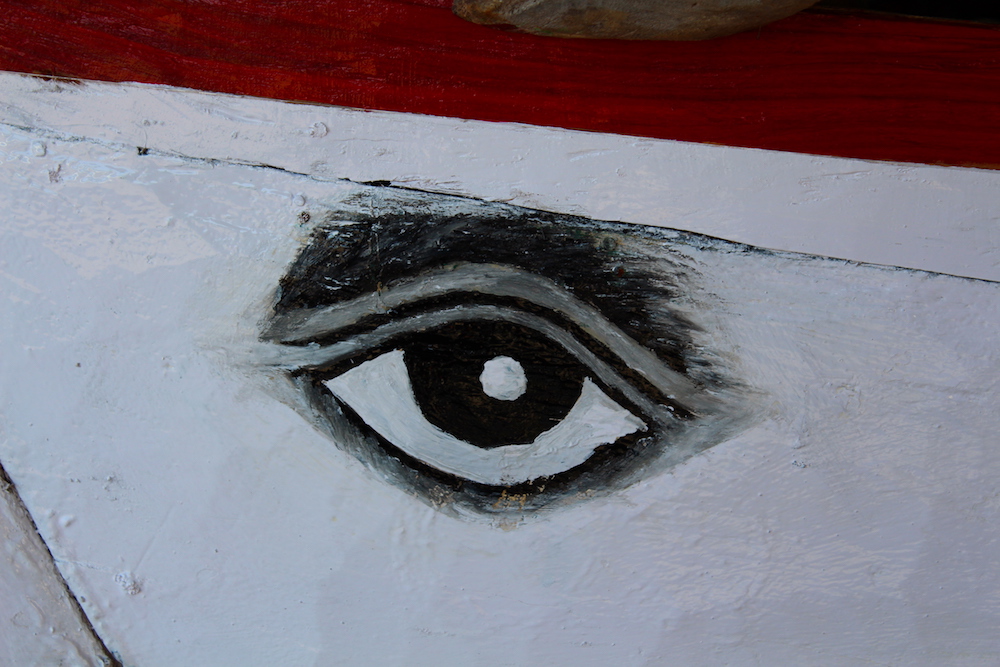 The motorbike ride to Lemalera was not fun. It took us 2,5 hours through the mountains and the roads where really really bad (not existing anymore). Ingo did the job of his life bringing us there and back again. The ride in the public bus (40.000 IDR) or a private car (1.000.000 IDR for the whole car) is also possible, but I guess its not more fun…

In the village we stayed at Mama Marias Homestay. That was our first real homestay and Mama Maria is really friendly. The place is very (!) basic, has a tiny “bed” for two persons, the food was ok, there is an outdoor bathroom with a bucket shower (mandi) and no toilet paper, and we paid 150.000 IDR each, including three meals. She does not speak English, but her son is the English teacher in town and can translate when he is around. Another option to stay in the village is at Ables Homestay, which we heard is a little nicer.

The center of the village is the beach. That is where “the action” is happening, which we didn´t see while being here (and we were happy about not seeing it), because they just caught five sperm whales the week before we arrived. At the beach you can see the boats, which they use for hunting, meet the fishermen and also see some of whale bones – they are very big!

At Mama Maria one of the town heros goes is around sometimes – a 52 year old harpoonist, who started hunting when he was 20 – to come to her place and talk to us in the evening. With hands and signs, half-English and google translate we managed to have a conversation, which was really interesting. The harpoonist is extremely proud of his work and explains everything willingly. While talking with him we were caught between fascination and disgust – because whale hunting is obviously not a beautiful business, it´s very cruel!! He explained that they have hunting season from April until September and caught 19 whales this season, so far. There are motor run boats that go out every morning, doing “normal” fishing, but also hunting dolphins, mantas and turtles. When these boats see whales, they get the local boats and drag them to the area. Then they are let loose, to be able to get close to the whale by paddling. The motors are too loud for that. One boat has a crew of 6 – 14 men (it’s a men thing only). When close enough the harpoonist jumps from the boat on the whale hurting it. Three boats then hunt one whale and keep the harpooning going until the whale is dead. That can be very dangerous because the whale has a powerful tail that can destroys the boats with one slap. On land the women’s work starts. Every family in the village gets a part, with the teeth being the most valuable part and the oil that is made brings the main income for the village.

We also met a film crew in the village that shoots a jet-again documentary about the village and its tradition.